Airgun Pellet Types
Wadcutter Pellets - for use with targets
They have a broad, round head that cut big holes in paper targets. Basically they make a better hole for you to see where you hit.  Wadcutters are good for plinking, and some competitive shooting events make their marksmen use them. They range from ultra-cheap target pellets, to dear competition ones.  Wadcutters aren’t very aerodynamic so they drop faster than other pellets at range. If you’re making shots out further than you’ve calibrated your sights, you need to adjust.
Domed Pellets - targets and hunting
Domed pellets are more aerodynamic than other kinds of ammunition meaning they hit harder at long distances.
These pellets have a heavier tip, which generates a ton of knock-down power compared to other pellets. They keep a lot of that power at long range too.  I recommend these for vermin as they kill better.  They hit harder than pointed pellets although not specifically designed for hunting. That said, they do a great job as long as your air rifle has good power to make good use of them. They don’t penetrate as well as pointed pellets, but they are typically heavier and hit harder.
Since domed pellets tend to be heavy, you won’t see exactly the same fps as you would with other types. But if you have a powerful airgun and you need to make even a long-range shot that hits the target hard, domed pellets are a good pick even at distance.
Pointed Pellets - targets and hunting
Pointed pellets are designed to penetrate. They’re a good choice for vermin at medium range, since they cut through thicker hair and feathers. They also have some of the same aerodynamic benefits as domed pellets, but they quite aren’t as pronounced.
They go faster and stay more true in flight and penetrate well.  One thing that sets pointed pellets apart from wadcutters and domed pellets is the skirt, which tends to be longer to compensate for the lighter tip.
Some of the best manufacturers of pointed pellets  include thick bands at the midpoint which are designed to engage the rifling and put more spin on the pellet.
Pointed pellets work better than domed pellets in underpowered airguns, especially pistols. They’re typically lighter than domed pellets. Since they penetrate better, pointed pellets are more likely to get you a clean kill at a range — even if your airgun isn’t outstanding.
Hollowpoint Pellets - hunting
When they’re fired out of a powerful airgun, hollowpoint pellets expand to cause maximum damage. Just like hollowpoint bullets, these pellets are designed to kill. You don’t want to use them for plinking, but they’re great for hunting.  They tend to be a little bit lighter than wadcutters which makes them fly faster. As they expand in the target, they dump all of their energy fast. That makes for larger wounds and better stopping power.
The downside is that hollowpoint pellets only expand if they’re traveling fast.
Depending on the brand, you only get good results above 1,000 FPS. If you’re shooting long distances, or if your airgun doesn’t have enough power, stick with pointed or domed pellets instead. But up close, they’re a killer. Nasty, like dum dums.
High-Velocity Pellets -hunting
High-velocity pellets come in different shapes, but they’re all built for speed.  Almost all high-velocity pellets are made using lightweight metals, typically lead-free alloys, so they travel faster than heavier ammunition.  Some high-velocity ammunition uses plastic sabots for a better seal with the barrel. Others have ridges or other features cast into the pellet itself to improve the seal. As a general rule, high-velocity pellets penetrate better and shoot flatter than other types.   The one drawback that comes with higher muzzle speed is its instability in flight. If you buy cheap high-velocity pellets, some of your shots will tumble and miss the target entirely. That problem only gets worse at long range so get the good stuff or don’t even bother.
Hybrid Pellets
Hybrid pellets combine the benefits of more than one style of airgun pellet. For instance,  some have a small spike in the middle. They give you a bit more penetration while still having some of the stopping power of hollow points.
It’s hard to categorize hybrid pellets since they come in so many shapes and style. But remember, you get the drawbacks as well as the benefits.

Whether buying a knife for sporting or hobby, display, collecting or work use ;

These are the CURRENT LAWS you need to understand before buying and venturing outside with any knives. correct as of November 2014.

The laws about buying and carrying a knife depend on the type of knife, your age and your circumstances.

It is illegal to:

The maximum penalty for an adult carrying a knife is 4 years in prison and a fine of £5,000.

Good reasons for carrying a knife

Examples of good reasons to carry a knife in public can include:

A court will decide if you’ve got a good reason to carry a knife if you’re charged with carrying it illegally.

Knives that are illegal

There is a complete ban on the sale of some knives:

This is not a complete list of banned knives. Contact your local police to check if a knife is illegal or not.

The differences between .22 and .177 calibre pellets. The .22 calibre pellet retains more energy at the limit of normal airgun ranges, and because of such will deliver more strike energy at the target or quarry. The pellet is heavier however,  so a shot with a .22 pellet can be less accurate than the smaller lighter .177 pellet as this travels faster and in a straighter line than the curve of the .22’s travel. Over the distance of most shots this curve is discounted.

Generally target shooters choose the .177 and quarry hunters favour the .22 for killing power, however clean kills are possible with a .177 pellet so long as the quarry is hit in the right place.

if not so good then always choose to use a .22

When you shoot the gun the CO2 pressure drops as the gas is released  allowing some more CO2 liquid to turn to gas filling the CO2 cylinder of the gun to the pressure it was before you shot the gun . Pressure drops quickly at the end.

This gives shot to shot consistency with CO2 but when the temperature changes from day to day the guns power will vary as gas expands more in warmer weather.  Unlike PCPs where as the air pressure changes so does shot to shot consistency (I thought I was missing the target with my PCP then realised it needed refilling, easy done when outside and the suppressed sound is not so obvious:) ).

DO NOT LEAVE CO2 in your pistol or rifle more than a week or so if not using the gun as it may perish the seals. Shoot empty to reduce the pressure before opening to avoid CO2 burn and to make it easy to open.

​The above is what I think, it may be different to other advice on the net .

The law makes no distinction between air rifles and more powerful guns for which you need a licence – they are all classed as firearms. This means that any offence you commit can carry a very heavy penalty, and there are at least 38 different offences. Following this code will help you to keep on the right side of the law, but, if you have any doubt, seek advice from BASC (www.basc.org.uk) or your local police firearms licensing department.

If you are 18 years or older there are no restrictions on buying an air rifle and ammunition, and you can use it wherever you have permission to shoot.

•borrow an air rifle and ammunition

•use an air rifle, without supervision, on private premises where you have permission

•buy or hire or own an air rifle, or ammunition, or receive one as a gift. Your air rifle and ammunition must be bought and looked after by someone over 18 – normally your parent, guardian or some other responsible adult. have an air rifle in a public place unless you are supervised by somebody aged 21 or over, and you have a reasonable excuse to do so (for example, while on the way to a shooting ground).

•use an air rifle under supervision on private premises with permission from the occupier – normally the owner or tenant. The person who supervises you must be at least 21 years old.

•buy, hire or receive an air rifle or its ammunition as a gift, or shoot, without adult supervision. Parents or guardians who buy an air rifle for use by someone under 14 must exercise control over it at all times, even in the home or garden. It is illegal to sell an air rifle or ammunition to a person under 18 years of age.

The difference between .22 calibre and .177 calibre pellets

​ ​SPRING  POWERED  AIR  RIFLES
In the spring powered air rifle (springer), there is a piston and a coiled spring inside the chamber. The spring is compressed when you cock the gun, then when you pull the trigger, you  decompress the spring so it causes the piston to move forward. The piston movement makes the air compressed in front of it and the pellet is propelled out of the muzzle due to the force from pressurized air.

​Don't leave a springer cocked for any length of time or you may fatigue the spring.

Follow these 12 steps for improved results:
Spring piston air rifles take 500-1000 shots to completely break in. Groups may be erratic for the first 100 shots or so.

​GAS PISTON / GAS RAM / GAS STRUT Air Rifles
A gas piston air gun (also called gas strut or gas ram) works the same way as the spring piston rifle but a gas ram gun has a gas-filled cylinder instead of a coiled spring. The air in the cylinder is already compressed and you apply more pressure to it when you cock the gun. The pressurized air is kept under tension until you release the trigger. When that happens, the pellet is discharged out of the barrel due to propellant force of pressurized air behind it.  You can leave this type cocked for some days

as there is no spring fatigue. 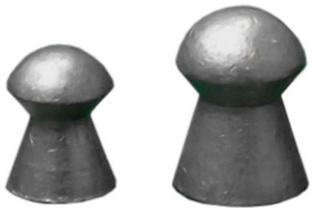 PCP's (Pre-Charged Pneumatics) - How do they work?
PCP guns use compressed breathable air as the propellant to fire pellets. For this purpose the air in the gun's air tank is compressed to 2700-3000 psi (pounds per square inch) generally by using a high pressure hand pump or scuba tank.  Once the gun's tank is filled to the desired pressure level, the gun is ready for use. The firing sequence of a PCP is really quite simple. When the trigger is pulled a valve opens and a quick burst of compressed air is released to travel up the barrel pushing the pellet in front of it. Each time the gun is fired the pressure and volume of available air in the gun's air tank is slightly reduced.
How many shots can you get before recharging is necessary?
Eventually the gun's air tank will not have enough air pressure or volume left to propel a pellet at the velocity needed to maintain a predictable trajectory. At that point, the pellets path degrades and alters the point of impact by as much as a quarter inch or more. Subsequent shots will not be "predictable" for shooting with pinpoint accuracy so the gun should be recharged.
We refer to all those shots with a nice, flat, predictable trajectory as "usable shots". Simply put, once the trajectory degrades due to lack of air pressure/volume, they are no longer "usable" in any predictable sense. The number of usable shots a shooter can take before reaching the recharging point varies due to a number of factors such as the gun's power, inbuilt tank capacity, original charge level and the distance you are shooting.